Mastitis is the term used to describe an infection in the tissue of one or both breasts. Typically occurring in women who are breastfeeding, Mastitis causes inflammation of the tissue, which applies pressure to the milk ducts. Symptoms of Mastitis include lumps in or around the infected area, pain and tenderness in one breast, fever and skin irritation.

Breast abscess is an acute purulent disorder of the breast mostly found in lactation period after delivery. It is rare in the duration of pregnancy. It is caused by retention of milk in the breast due to mental depression affecting the qi of the liver or due to overtaking of fatty food that brings about stagnation of heat in the Stomach Meridian or due to obstruction of the milk duct after invasion of exogenous toxic fire into the breast through the rupture of the nipple.

Main manifestations: Redness, swelling and pain of the breast, mostly occurring after delivery. At the early stage when the abscess has not yet been formed, there is a lump in the breast accompanied by swelling, distension, pain, difficult lactation, chills, fever. headache, nausea, and dire thirst. Growing of the lump with local bright redness and intermittent throbbing pain indicates suppuration. Analysis: Since the stagnated liver qi and obstructed lactation lead to production of heat, there occurs redness. swelling, and pain of the breast with difficult lactation. The confrontation between the exogenous pathogenic factors and the body resistance causes chills. fever and headache. The pathogenic heat in the stomach disturbs the descending of the stomach qi, manifested by nausea and dire thirst. Unrelieved stagnation of milk may produce heat. "Extreme heat causes putrid muscle, and pus follows." So there is growing of the lump in the breast with bright redness, burning and intermittent throbbing pain. 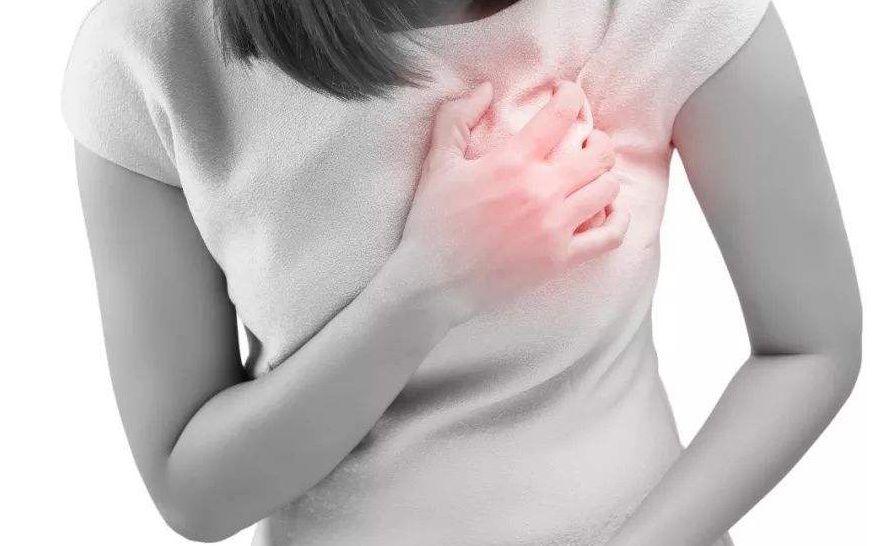