In virtually all women ovulation and menstruation stop completely at some time between the ages of 44 and 55. Many have uncomfortable symptoms during this process. Some have hot flashes, sweating, dizziness, tinnitus, heart palpitation, irritability, irascibility and hotness in the five centers. Others have aches in the waist or back, edema and diarrhea. Yet others have menstrual irregularities, emotional lability or depression. The exact constellation of symptoms and their duration both vary, differing from woman to woman. Some have little discomfort. Others may have such symptoms for about a year. An occasional woman may suffer from them for several years, even over a decade. When severe, such symptoms may interfere with normal daily living.

The constellation of symptoms surrounding menopause is sometimes known as the menopausal syndrome.

Under the influence of their constitution and their living environment, some women have difficulty adjusting to this stage of their physiological development. Imbalance of Yin-Yang may then produce a variety of systemic symptoms. Because of the decline in kidney-Qi and increasing inadequacy of essence and blood, with the additional burden of improper diet, physical fatigue, excessive passions and unregulated sexual activity, kidney-Yin progressively weakens and kidney-Yang submerges. If kidney-Yang declines, the meridians and channels lose their warmth. These changes can also affect the heart, the liver and the spleen. 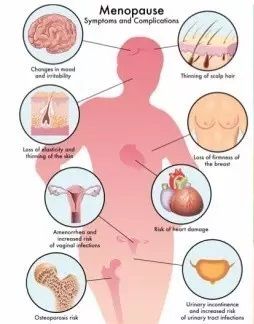